In Matthew 14:25-33, we read of the story of Jesus walking on the water and terrifying his disciples as he did so. Then Peter, doubting that it was really Jesus, asked Jesus to invite him to get out of the boat and join Jesus on the water.
Peter was fine until he lost focus and noticed the winds stirring up the waves. Then Peter began to sink and cried out, “Lord, save me!”.
Today, we are concentrating on the winds and waves of Hurricane Sandy and losing focus on God. America is more interested in the favorites on Survivor, The Voice, or American Idol than on the true issues underlying the current election.
We would rather focus on our favorite ball team, than on the under-the-radar initiatives being perpetrated by the Soros/Obama machine which is working apace to undermine our sovereignty and core American values.
In an article researched by and attributed to Steve Kroft of CBS’ 60 minutes, it was reported:
Who is Obama? Obama is a puppet and here is the explanation of the man or demon that pulls his strings. It's not by chance that Obama can manipulate the world. I don't think he knows how to tie his shoe laces. After reading this and Obama's reluctance to accept help on the oil spill, you wonder if the spill is part of the plan to destroy the US.
Who Is George Soros? George Soros is an evil man. He's anti-God, anti-family, anti-American, and anti-good." He killed and robbed his own Jewish people. What we have in Soros, is a multi-billionaire atheist, with skewed moral values, and a sociopath's lack of conscience.
He considers himself to be an elitist World class philosopher, despises the American way, and just loves to do social engineering and change cultures. . .
Soros has repeatedly called 1944, "the best year of his life." 70% of Mr. Soros's fellow Jews in Hungary, nearly a half-million human beings, were annihilated in that year, yet he gives no sign that this put any damper on his elation, either at the time or indeed in retrospect" During an interview with "Sixty Minute's" Steve Kroft, Soros was asked about his "best year."
Kroft: My understanding is that you went out with this protector of yours who swore that you were his adopted godson.
Soros: Yes. Yes.
Kroft: Went out, in fact, and helped in the confiscation of property from your fellow Jews, friends and neighbors.
Soros: Yes. That's right. Yes.
Kroft: I mean, that sounds like an experience that would send lots of people to the psychiatric couch for many, many, years. Was it difficult?
Soros: No, not at all. Not at all, I rather enjoyed it.
Kroft: No feelings of guilt?
Soros: No, only feelings of absolute power.
The website Greek National Pride reports, "Soros was part of the full court press that dismantled Yugoslavia and caused trouble in Georgia, Ukraine and Myanmar [Burma]. Calling himself a philanthropist, Soros' role, is to tighten the ideological stranglehold of globalization and the “New World Order" while promoting his own financial gain. He is without conscience; a capitalist who functions with absolute amorality." 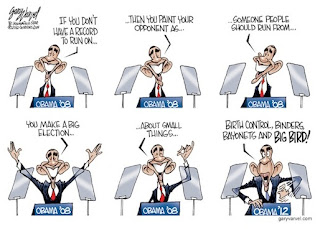 The Benghazi scandal is drawing our attention away from the election. Obama sycophants are refusing to believe that their idol, Barak Obama, could possibly be guilty of ignoring the cries of Americans in danger on foreign soil. Instead they are accusing the Republicans of making much ado about nothing.
The media is flagrantly ignoring the obvious lying that took place following the carnage and destruction of our embassy in Libya and the death of four Americans.
The mainstream media is failing to report on essential issues like Obama and Clinton quietly positioning us as a servant of the international United Nations.
Inviting the UN to monitor our upcoming election is but one minor example of the efforts to continue the practice of national genocide through abortions, removal of guns from private ownership, allow international control of the seas by agreeing to the Law of the Sea Treaty (LOST). The nose of the camel is under the tent!
Just as a major illusionist obscures his real behavior to deceive the audience by waving his hand to cause them to focus on trivial actions, so the Obama administration is trying (not too successfully overall) to cause Americans to focus on trivial issues in their campaign.
In the case of the Benghazi, Libya attack on our embassy, they became so enamored with their skill at deceit that they attempted to place blame on an almost cartoonish film instead of owning up to their treasonous response (machinations behind the scene?) to the burning of our embassy and their culpability in the deaths of four Americans.
Will average, uniformed Americans continue to ignore such un-American behavior and excuse it at the polls next Tuesday? Or will we contact our representatives in Congress and insist on the revelation of the truth behind the administration’s ill-thought and ill-conceived actions.
Once the full reality becomes known, will we have the courage to demand, at minimum, the resignation of the senior members of the administration who perpetrated this heinous behavior and better, even prosecute those knowledgeable individuals (Obama, Clinton, Rice, Panetta for starters) for their treasonous acts?
As the story unfolds, do we have the will as a nation to own our mistake in electing and continuing to support the behavior of a president who, most likely, is actually ineligible to hold the highest office in the land? Or will we instead, search out the facts and proceed to rectify our mistake at the polls?
America, return to the God of our founding fathers! Prayfully seek God’s guidance on the issues, then vote for the candidate that best embodies the values of the Bible!